First test using Dithering with the MGEN. If Dithering (Random Displacement) is on, the MGENII slightly moves the RA axis of the mount between the shots. The moving amount value is setup in pixels and can be found in main menu – Random Displace – Width.

65 subs total. Minus 5 subs with airplanes/satellites, minus 4 subs at the end of the session, because I lost the guide star which resulted immediately in star trails due to the PE of my Star Adventurer.
All other subs were perfect 🙂 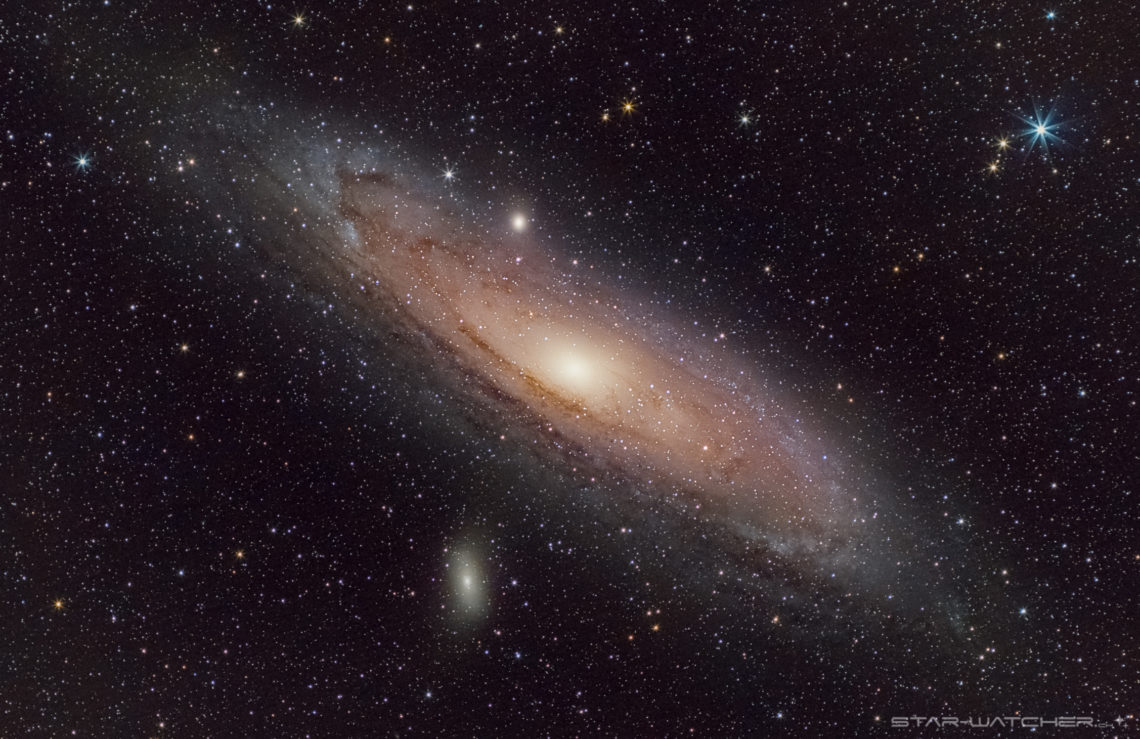 The Andromeda Galaxy, also known as Messier 31, M31, or NGC 224, is a spiral galaxy approximately 780 kiloparsecs (2.5 million light-years) from Earth. It is the nearest major galaxy to the Milky Way and was often referred to as the Great Andromeda Nebula in older texts. It received its name from the area of the sky in which it appears, the constellation of Andromeda, which was named after the mythological princess Andromeda.

Being approximately 220,000 light years across, it is the largest galaxy of the Local Group, which also contains the Milky Way, the Triangulum Galaxy, and about 44 other smaller galaxies. Despite earlier findings that suggested that the Milky Way contains more dark matter and could be the largest in the grouping, the 2006 observations by the Spitzer Space Telescope revealed that Andromeda contains one trillion (1012) stars: at least twice the number of stars in the Milky Way, which is estimated to be 200–400 billion.

This website uses cookies to improve your experience while you navigate through the website. Out of these, the cookies that are categorized as necessary are stored on your browser as they are essential for the working of basic functionalities of the website. We also use third-party cookies that help us analyze and understand how you use this website. These cookies will be stored in your browser only with your consent. You also have the option to opt-out of these cookies. But opting out of some of these cookies may affect your browsing experience.
Necessary Always Enabled
Necessary cookies are absolutely essential for the website to function properly. These cookies ensure basic functionalities and security features of the website, anonymously.
Functional
Functional cookies help to perform certain functionalities like sharing the content of the website on social media platforms, collect feedbacks, and other third-party features.
Performance
Performance cookies are used to understand and analyze the key performance indexes of the website which helps in delivering a better user experience for the visitors.
Analytics
Analytical cookies are used to understand how visitors interact with the website. These cookies help provide information on metrics the number of visitors, bounce rate, traffic source, etc.
Advertisement
Advertisement cookies are used to provide visitors with relevant ads and marketing campaigns. These cookies track visitors across websites and collect information to provide customized ads.
Others
Other uncategorized cookies are those that are being analyzed and have not been classified into a category as yet.
SAVE & ACCEPT